What’s large flat and has a bunch of stationary vehicles? Not a traffic jam but almost every rental car lot in America. How long did it take for someone to take advantage of that, not long? Get a load of this…… 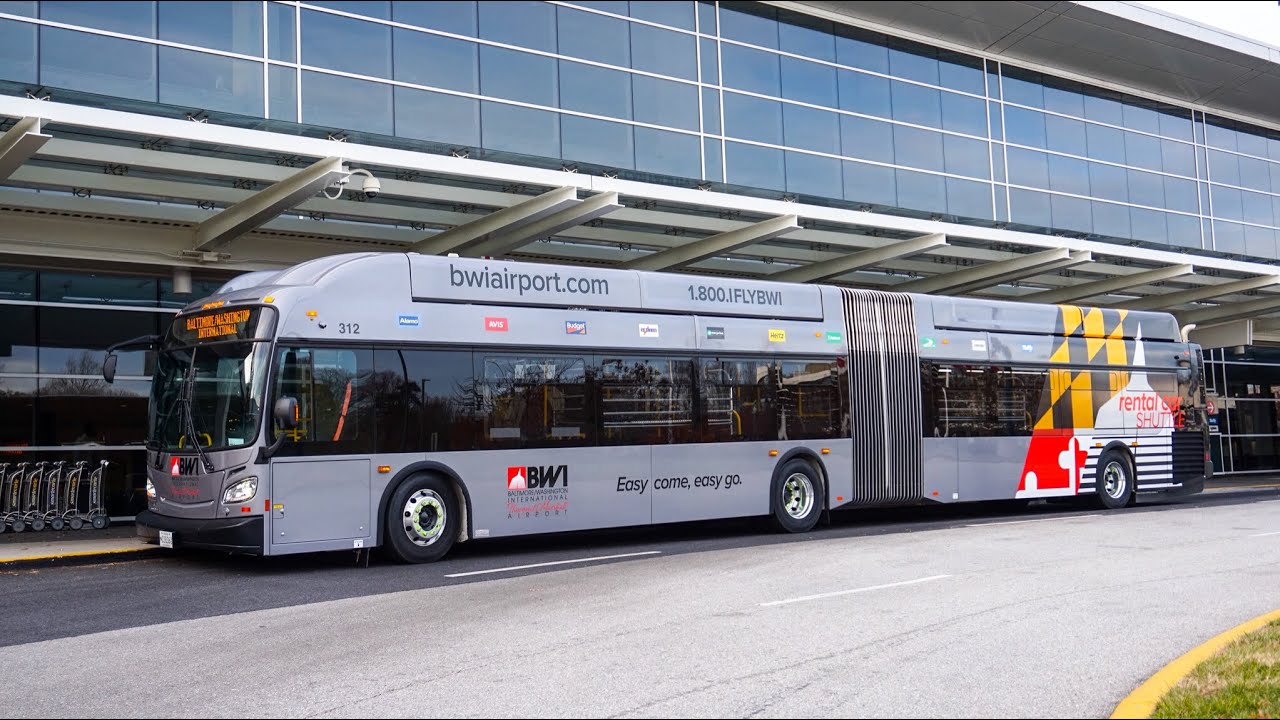 MDTA Police detectives charged 2 individuals in connection with thefts of 28 rental cars between May and July 2019….. The vehicles were worth more than $660,000 in total, police said.

Detectives said one of the individuals used their job as a security officer with the Allied Universal Security Services, a company contracted by rental companies at BWI Airport to allow one of the individuals to drive the rental cars from the secure facility without a rental contract. Police allege the two then sold the rental cars. Both face numerous charges including theft scheme greater than $100,000 and 28 counts of unlawful taking of a motor vehicle.

First, this isn’t even COVID related, May – July 2019. The BWI rental setup is one of the worst out there as it easily adds an extra 20 minutes to your trip time.The rental facility is so remote that some of these cars might had run out of gas and might still be sitting on the side of the road. My other issue is that there’s no gas stations close by, almost as bad a Newark.,

“Powered by the slow and steady rise in weekly demand, the industry clawed its way above 40% occupancy,” said Alison Hoyt, STR’s senior director, consulting & analytics. “That was still down substantially from the comparable week last year (73.6%) but an obvious improvement from the country’s low point in mid-April.

Chateau Relaxo to English translator, some of which comes from Urban Dictionary because I’m not that creative.

Let’s start with Chateau Relaxo – No humblebrag here We built this house four years ago, and it is more than double the size of Frick-Ford Farms our previous residence. With more space comes new furnishings, and once everything was in place I looked over at the CEO and uttered “This place is so nice no one will ever leave here”, and three years later no one has left, and we’ve added a new resident. In all honesty short of a mountain home on a stream, I’m inclined to stay here as well.

Knox-Vegas & Chat-Vegas & Nash-Vegas, any major city in Tennessee except for Memphis. Mem-Vegas sounds like a stripper or an over the counter stomach medicine. Originally emanated Nashville as a whole, but locals know this actually refers to Lower Broadway in all of her neon lit, “why am I still up at 2 a.m.” glory.

Sled – Car, but not your average car, for instance, your 2018 Chevy Malibu is not a sled. A sled is a Cadillac Escalade painted white or black with chrome rims. A sled is also a car you don’t see a lot regardless of year. Both a Toyota Camry station wagon or a Ford Taurus station wagon would be a sled. A 1992 Land Rover Defender is a sled, and if you see one that’s for sale, hit me up.

Gooey-Frap – Everyone knows I’m not a huge fan of Starbucks, or even the Double D, Dunkin Donuts, but I am a fan of coffee. My first issue with those establishments has to do with the ordering process and my simple rule when it comes to ordering coffee. If you have to take a breath while ordering your coffee you really don’t like coffee that much.

Consider this a “Grande in a venti cup, 20-pump vanilla, 20-pump hazelnut, whole milk, 190 degrees, add whip and extra caramel drizzle latte.” Seriously I can order dinner at Chili’s quicker than that.

The term Gooey-Frap is attributed to Brittany Spears circa 2000 when every picture she seemed to be holding some sort of s sticky Starbucks Frappuccino, hence Gooey-Frap.

Lot Lizards – Prostitutes that frequent truck stops. Next time you pull into a Pilot, Flying J or TA truckstop take a look around. Why do you think they call it TA Truckstop.

Road Warrior – This is a self-described term used by corporate lackeys that spends a lot of time on the road (via automobiles), living in motels and eating in restaurants and diners. Many use this term to glamorize, romanticize and/or rationalize their lonely profession, sometimes to impress lot lizards and other prostitutes that frequent the world of the itinerant traveler.

Baby Road Warrior – The same as above, but packs way too much and is still dragging around a piece of luggage they bought at TJ Maxx.

#local – As in #DrinkLocal or #EatLocal, but not eating or drinking local because you are or want to be a hipster. Eating as well as drinking local will give you two things, the essence of the town you’re at as well as great stories to tell when you get home. For example, have any of your friends shared an amazing story of their visit to the Olive Garden in  Topeka, KS?

Traveler – Not what you think.  A “to go” alcoholic beverage, usually poured into a plastic cup for disguise. You take a traveler poolside at the hotel or as you walk through the streets of NashVegas.

Horizontally Challenged – The person filming what they hope will be a viral video but they don’t flip their phone horizontally resulting in a crappy video.

Florida – Being based out of here and living in this state longer than anywhere else, it deserves some respect.

WTF – Again not what you think. Welcome To Florida. Most, after my extensive research, weird stories emanate from or happen in Florida. After reading or discussing the story it’s normally followed with “Thank You Florida”

Florida Man  – Direct from Urban Dictionary because they say it best.

A keyword used a lot to describe all the weird news stories about random Floridians committing weird and dumb crimes, due to the state law regarding freedom of press about the fact that every police or court case must be public. Most of these weird stories, however, are related to white Florida men, the police and drugs. Due to this, this is why people outside Florida hate Florida.

Floridiot – Someone born in Florida. Subject to massive amounts of fluoride in their drinking water, thus making them do retarded stuff and having low IQ’s. They are notorious for not knowing how to drive and causing insane amounts of unnecessary traffic accidents.

FloGrown – A Florida native, and normally proudly displayed using a sticker on the back window of their F-250 Ford Truck with large noisy tires.

Pavement Princess – A badass 4×4 truck that is usually lifted with huge tires (over 33″) who’s owner is too much of a dweeb to take off-road. Normally has a Flogrown sticker in the back window.

Suicide Flight – This is normally the first flight out in the morning. The reason I call it suicide is that the pilot just woke up in the last few hours, just like you. Could you fly a plane at 6:00 AM?

Gate Lice – Passenger, often inexperienced flyers in Kettle Class, who crowd around or line up at a gate at an airport completely blocking the boarding area and preventing First and Business Class passengers from being able to get on the plane when they’re allowed to.

Kettle Class – Can be used to refer to all of Coach/Economy Class on a plane but usually used to highlight those passengers on a flight who, through their behavior, make it very apparent that they aren’t familiar with how to get around at the airport, get through security or get on a plane without delaying or inconveniencing everyone else. Typically they are from flyover country.

Flyover Country – The middle-class Midwest that is typically “flown over” by scheduled airlines in their hops between their major hubs.

Good Nudity – First, and most importantly, it’s naked people that you want to see naked. It might involve dim lighting, drinks, and music.

Bad Nudity – First, and most importantly, it’s people that you never wish to see naked. Bad nudity involves nudity at an airport, on an airplane, or the lobby hotel. Normally accompanied by really bad lighting, which might actually be a good thing.

Airline Beverage – Normally Ginger-Ale. Not sure why but everyone seems to order Ginger-Ale on flights.

Airport Food – Food you can only get at an airport. Not as common as it once was, and now it’s being blended with mall food. Think Asian Chow, Sbarro’s and Aunt Annie’s Pretzels. Not saying that it’s bad food, but no one comes home on Friday wanting to take the family to Asian Chow for dinner.

Outlet Hog – A person who plugs electronics into outlets that end up taking more space than it should and blocks the usage of other outlets.

Jerry: I don’t understand. Do you have my reservation?

Rental Car Agent: We have your reservation, we just ran out of cars.

Rental Car Agent: I think I know why we have reservations.

Join a loyalty program so you never have to stop by the rental desk.

Rentalcross – Using a rental car for racing or other performance driving.

Don’t be gentle, it’s a rental.

What’s the difference between a jeep and a rental car? There are some places you can’t take a Jeep.

Hotel – A place you never want to work.

Hotel Sex – The hope, normally by the male, that the evening away from the kids in a strange room will entice his partner into strange kinky sex acts that he accidentally stumbled across on the interwebs. A less than 50% chance of it ending up the way he had envisioned it to.

Interweb – A sarcastic term for the internet. Often used in the context of parody regarding an inexperienced, unskilled, or incoherent user.

Down-and-out – A hotel where the doors to the room are on the outside. Typically the hotels that you see on shows like Live PD and COPS. Avoid these at all costs.

La Quinta – Spanish for “Behind Dennys”

Restaurant Recon – Pulling into a restaurant parking lot, and sending a passenger into the restaurant to find out the wait time for a table while the driver sits in the car.

Breastaurant – Any wing restaurant where the wait staff wears short shorts and tight T-Shirts. Think Hooters or Twin Peaks. Think Michael Scoot from the office and his order at Hooter’s “Chicken breast hold the chicken”

Food Food – Real food eaten at an establishment when you don’t order your meal by using a number. “I’ll have a number seven, large”

Meat and three: A typical Southern dinner. Meat and three sides, heavy on the mashed potatoes and gravy. Yes Mac-N-Cheese counts as a veggie.

I had just the water – My typical response when out in a group and were asked if we’re ready for the check.

Leave me a message on Anchor, or shoot me an email TravelFrick@gmail.com

You can also check us out on the web at hypeAmerica.com or Instagram @SWFrick

As I keep hoping to say, Travel Safe, but since no one is traveling I’ll stick with stay safe and thanks for listening.