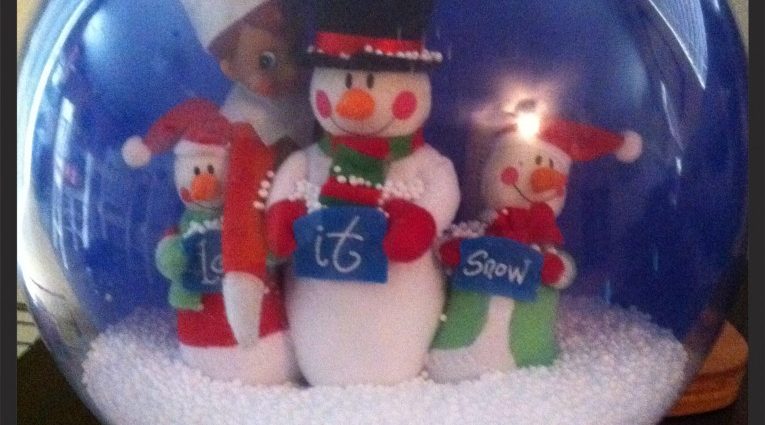 So, it’s that time of year again. The time of year where #elfhaters everywhere are coming out of the wood works elf shaming this poor, harmless, unsuspecting friendly Christmas apprentice. “I don’t have time!” or “What kind of person can think of all of these things?”  are just some of the intruding, invasive thoughts that ravage their elf loathing pea brains. Wanna know what kind of weirdo, what kind of sick, twisted crazed lunatic spends hours upon hours on these ridonkulous shenanigans? This kind of person. This person loves the thrill that it gives her kids, and the  laughter and excitement that stems from that will never get old. I think another reason why I love it so much it is because ever since my kids were born, we have been searching for yearly traditions that we maybe ended up doing one year, and not the next, and this is the thing that stuck. This is the thing that my nuggets will look back on and they will remember the time when Nicky sat on the toilet and sharted.

This year is very special. It’s the dawn of a new era! This will be, as I’m sure, my youngest 2 kids’ (twins) last year of believing. It’s the last year of Nicky nonsense  where my kids eagerly and innocently search the house, find him, hopefully belly laugh or enjoy a treat that he has given them, and anticipate the antics that he will do the following days and weeks to come. We still read the book every Black Friday evening (we sleep over at my mom’s on Thanksgiving night to go shopping the next day) Last year, my oldest daughter figured out the Santa phenomenon. At first, I was devastated. I mourned the days where she would revel in the magic all month long, and thought of her face on Christmas morning as she saw her presents piled up. And I was sad. Sad for this era to come to an end. But, then I realized that it really doesn’t have to.

But, we will get to that in a bit. I do understand that not everyone is cut out for this elf thing. Unfortunately, for the people who know me and hear my kids talking about him CONSTANTLY, I knew the second that I heard these dudes advertised that this was something that was going to totally amplify my Christmas game. I have the kind of husband who works late, and when I shoot straight up at 1:00 a.m. from a groggy half sleep stupor, and realize that I forgot to move Nicky, all it takes is one text. And I get to wake up in the morning, alongside my kiddos, albeit this time completely ignorant to the elf’s antics, and luckily stumble upon something like this. Although, it did take circling the house 6 or 7 times, because, really – who would have thunk to look closer at the snow globe that sprouted an awkward, new guest overnight. Believe me, there are days where my whole plan comes together. Where a simple prop can create a fantastic scene. Where I can line girls up and have them do the whip and the nae, or I can put Nicky in a locker and the ridiculousness ensues. Then there are days where I put a little more time into my vision because damn, dude – these old time harbor, possibly shipwrecked jerkoffs were just calling my name. I could not resist making a fake patch and hook to pull off the look. I mean – I already had the parrot and the bucket, and there are nights where I will do ANYTHING to pull off the scene.

And then, there are those times where midnight is approaching and I haven’t moved the damn elf yet. Don’t get me wrong – I love it. But, even us diehard Elfaholics get worn out. So that’s when I look through my kids’ toys, grab the oddities that stick out among all of the normals, and put them together to make a Hulk-Hogan-Elf-in-the-bucket-Santa type of nonsense BS scene. The kids’ quizzical faces are always so rewarding in the morning as they have this philosophical conversation with each other over pancakes: “Where do you think he was going with that scene?” “What was the motivation?”  I know the answer. It’s December 21st, and your mom is stone ass cold effing tired. For the most  part, my husband is a great elf counterpart. Whenever I do need his help, he is always happy to oblige, and whatever he ends up doing with the 10 seconds of thought that he puts into it usually yields a belly laugh from every onlooker that passes by. But, there are times that I wake up after I needed his help the night before, and I get this. So, this is where my oldest comes in. All hope is not lost after all! Needless to say I am certainly looking forward to more help with the Elf, and after she got over the initial shock, and the aftermath of that “yes, mommy and daddy help Santa a LOT” conversation slowly wore off, she is now eager and 100% invested in not only helping, but drafting up a contract of which days that she will be in charge of the elf. We go in stores together, and she will pick up something, point, and wink. And I just know. I know that she just thought of something cool, and we revel in the fact that we have this little inside secret to share with each other this year. It’s HARD when your baby stops believing. And she was even a late one. As preciously, innocently naive as she is, it was time. She knew it first, but didn’t want to listen. She had a lot of questions, but she did not want to ask them. It’s a pivotal point in her life, and ours as well. Those fun, magical days of believing in Santa are over, but it’s time to move on and not only go with the flow, but embrace it.

So, Magical Elf Nicky – I must soon bid you adieu. My kids will shortly raise their BS flag on your rubbish, but they have loved every second of it.  What does actually give me solace is the fact that my elf is not going to simply disappear and fly away for good strictly because soon we will have a house full of non-believers. It’s still going to happen! So, go ahead and hide me now on your news feed. Get ready for my daily elf pictures, and my witty (to me) remarks of what happened overnight in the St. John abode. And expect it to keep happening FOR-ever. Because, after all, what truly makes me happy and riddled with delirious excitement is the fact that when they’re 20 years old, and coming home for the holidays, they will wake up in the morning, and find Nicky making inappropriate advances towards Papa Smurf. ‘Tis the season for rolling with change.