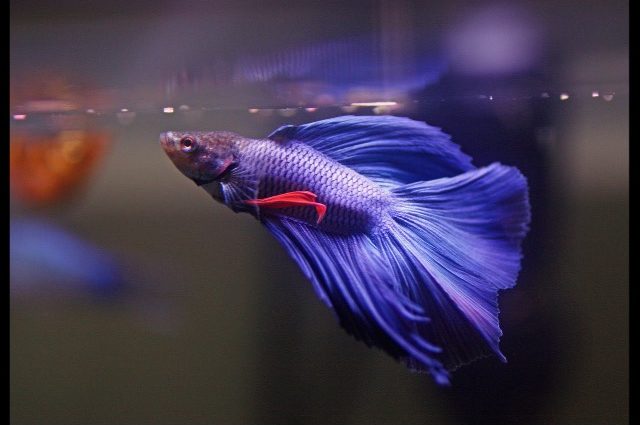 Dear Hank: I can’t say that I remember why in the F we named you Hank, other than it does rhyme with the word “tank.” Your tank was your refuge, your place of solitude, where you would read your Stephen King novels, and listen to your gangster rap. It’s also where you blew your last air bubble, and after we were able to pull ourselves up by our Converse straps, I realized that I had a few words to say.

I didn’t want you at first – I’ll admit it. We went to the pet store to look at the cats and dogs, and somehow my husband talked me into buying you, as he was already loading all of your equipment in the cart. Dripping in disappointment, I said “I will NEVER clean this stupid tank, so don’t even ask!” And I screamed some really ugly other things, too, along the lines of: “What a *(#$%@ waste of money!” And, as I watched my husband clean the tank out week after week with great satisfaction, and didn’t offer one stingy hand, I took pride in the fact that I stuck to my guns, because $60 to stare at a dumb fish swimming around in never-ending circles of depression and hopeless skepticism, just seemed astronomical and pointless. But, boy was I wrong! Hank – You were one of a kind. Even though you were a Betta fish, you were really the Alpha. I’m not really sure if you encompassed Alpha in every since of the word, since you were an only fish. But, you dominated that tank in a way that no other fish could have. Sometimes when I would sneak up on you really quickly, I saw you scrubbing the inside of the tank with your yellow gloves and little fish toothbrush. I know you were a clean freak and suffered slightly from OCD, but we could see you so clearly through that sparkly spot. And, we could see who you really were, on the inside of your hardened soul.

What we saw was a sensitive, fresh-faced caregiver, and a supportive, yet pessimistic friend to all. I know you didn’t like the dog, and that you thought nobody noticed the stare offs and the fin flipping that you would do whenever you thought you were the only 2 in the room. But, it just goes to show me that you were only hum…you were a typical fish. We didn’t always agree politically. I mean, I saw your protest signs. They weren’t always in good taste. And there were those rumors about your criminal record. But, you had obviously reformed. I also really enjoyed your open mic slam poetry sessions. You triumphed through a dark and seedy past and I’m so proud of your transformation.

As I look back and reflect upon all of the good times we had together, I can’t help but to mostly smile. You left such a grand footprint (?) on our lives because of the fruitful way that you lived. You were so positive, except for that one time, and I think we all model ourselves after your sarcasm and crude laughter. The crazy joke bombs that you loved to drop when we least expected it always made us double over. And your fashion sense – wow! I had never met any amphibian before who could throw together such an eclectic ensemble. You could pair pin stripes with a cowl neck, and do so with classy flair. I think you could have given those red cowboy boots a rest, but it seemed like they made you really happy.

You were so multi-faceted. I think you cried yourself to sleep a lot, but it was hard to tell. I could tell that you were a deep thinker, even though you barely made your way through high school. I’m not really sure what you did on the side, but you left behind a pretty hefty bank account. I haven’t found your debit card PIN number yet, but I’m sure you would have wanted us to split your inheritance/robbery winnings. I met your widow/side Betta, the other day, and all I can say is “Whoa.” You were a player, Hank. She is a real looker who truly appreciated your extreme side part comb-over. I know you were always proud of your Olympic gold medals. I never saw any of them, but you did tell some really tall tales about pole vaulting and bobsledding. You did brag about being an Eagle Scout, a karaoke legend, and a race car driver, and sometimes that would become a little too much to handle, but it was everything that made you – you. Who was I to question your stories, even though the details would change every single time? Oh, Hank. As I sit here and wonder how I’m going to get through next week without you, I take pride in knowing that I have become a better person because of you. The lessons that I’ve learned have been insurmountable, even though there’s a gaping, sinkhole void. We had you for 2 (maybe 3, who the hell knows the real truth) years, and even though you’ve lived a bit shorter of a life than most Betta fish, it’s the quality of life that’s the most important. I know you said you were an atheist, but I will always feel a jolt of religious positivity when I think of you.

I hope your path to heaven is paved with platinum fish pebbles and soy based fish flakes. I didn’t truly understand why you were a vegan, but I made it my life’s duty to enlighten and empower others with your vision and importance of tofu sushi. A true environmentalist (even though you lived in a 6″ tank) and womanizing Olympic fashionista icon – You will be sorely missed. RIP, Hank.