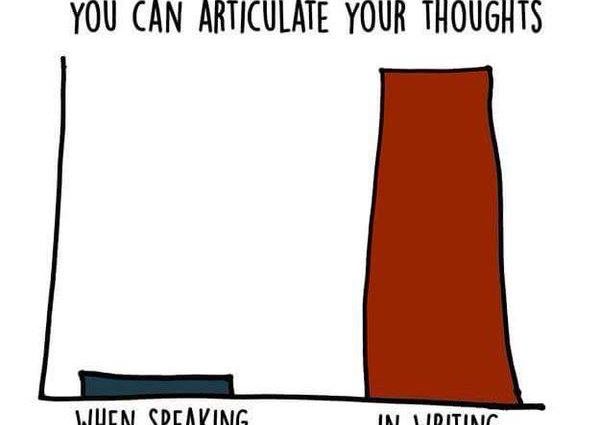 Look. I’m a weird freak and you’re never going to get me. Ever. I always have to make excuses for my oddities. It’s very hard to explain to people that I despise the hell out of small talk. Or that I get mentally overwhelmed when I’m in a group or crowd of more than 6 people. Believe me. I get it. #freakshow is in the house.

I also have a hard time swallowing this pill: “Honey, we are going to dinner with the McDougall’s tonight. You’ll like them.” Oh, helll no! No the hell I will not!!!

Nobody seems to understand what it’s like to get so anxious about social events or gatherings. You cannot just spring on me that we are going to hang out with so-and-so next Saturday evening if you do not want me to lapse into a convulsive coma beforehand.

I always wondered what the correlation was, if any, between having social anxiety as opposed to being an introvert and/or simply being shy.  Most people would not even realize it after meeting me. I can be a wacky, sarcastic SOB. I blurt shit out, I have self-deprecating humor, and I have been known to make a bitch smile. However, that’s not the stuff that is going on inside my feeble brain.

It’s very sad because being an introvert most of the time just blows. I always have very good intentions. I get an invitation, have every intention on honoring said invitation, buuuuuuuuut will usually cancel out right beforehand. The anxious agony leading up to it is just not worth it. And because I absolutely loathe small talk, that makes things SO MUCH worse. I don’t hate small talk as much as I fear it. When faced with another colleague, customer, or client – BRAIN DEAD. I have nothing. I GOT NOTHING. It’s such an uncomfortable feeling from deep within my bunghole, and then I just make an excuse to vacate. Into eternity. Introverts: People who can draw energy from being alone with their thoughts. They enjoy, and sometimes even need, a deep conversation with people they trust; they often don’t like small talk, and rather don’t often see the point in it. But, after a while, they will feel the need to be alone again, to recharge and sort things out on their own.

Social Anxiety: A chronic mental health condition in which social interactions cause irrational anxiety. It’s the fear of interaction with other people that bring on self-consciousness, feelings of being negatively judged and evaluated, and as a result, leads to avoidance.

Shy: Being reserved or having or showing nervousness or timidity in the company of other people.

Oh, boy. Well, I don’t really consider what I have a ‘mental health condition.’  I wouldn’t take medication for it, since it’s only situational. Here’s how I remedy the problem: I just cancel. Then, I’m fine!  Although I usually feel guilty afterwards, especially when I see all off the event selfies.  Thanks, jagoffs.

But I definitely have it. I got something. I have the funk, for realz. I mean, I want to get together with my fellow blog peeps really bad, but, when push comes to shove, I’ll probably just talk myself out of it. Again. When I was a fetus, I was “shy.” I would hide behind my mother’s legs, even when family would come to visit. There was such a big social void that I was never able to be comfortable in my own skin, because I was always hyper aware of anyone looking in my direction. My skin would feel like it was on fire if I even had to go up and sharpen my pencil. If I had to walk in the classroom late, forget it. Once all eyes were on me, my fight or flight would kick in, and then this chronically inferior bitch would leave the building. I’ve already written a post to document my awkwardly crazed infested past. So, I won’t get into any of that repetitiveness here. You can read that post here:  Who is a socially incompetent nutcase? This girl.

A few weeks ago, I went to dinner with a friend. And like 17 of her closest friends. Dude. I was an awkward, ridiculous, shifty, sweaty, stupid mess. Yeah, I knew most of the people. But, putting me around even a couple people that I don’t know, surrounded by noise and nonsense, and laughter that’s not coming from me – recipe for destruction.  “Why is Tara crying?”  I’m just so happy to be here. 🙂 So, bottom line: I’m a spastic, insecure, brutally awkward freakish waste of space.  I am pretty sure that I am afflicted with a combination of all 3 ailments. If my doctor gave me a prescription, It would read:

“Shy, socially inept introvert with some bitch tendencies to disguise feelings of discomfort.”  Yeah, suck on that.