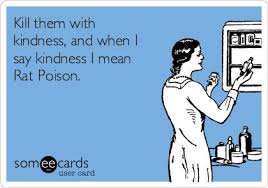 So. I’m just like any of you jackwads out there. I’m just an ordinary Jane St. Doe from Normalville, Blandaho living the typical dream, relaxing here on my customary couch watching the Real, Ordinary Housewives of Standard Vanilla Suburbia.

But, there’s something (a shit load of things, if we’re being honest) that might separate me from you, your bestie, your neighbor, and anyone else that you’ve ever met in your life, passed on the street with a heartbeat, possibly a pulse, but  certainly that’s not a criteria for our lesson here today.

See, I want people to get along and be happy. I don’t like confrontation, upset feelings, bad vibes, or awkward. I hate the awkward. But, more than anything, I don’t ever, EVER want to hear “Tara’s NOT nice.”  #canyouimagine So I have this major personality dysfunction: I’m a little too effing nice. I hate it sometimes! I love it sometimes. But, regardless, It’s a struggle. I can certainly think all the thoughts! When something happens, the thoughts – they will inevitably come. The uglier, the better, and the more inappropriately sarcastic, the more enjoyable. I have no problem thinking the thoughts. My problem is expressing the verbal requirement that comes with the thoughts. The only thing that separates me from normal people is that I just have enough restraint to be able to hold it inside. #adulting

I never will be able to understand rude ass jerkies. I don’t get the intentions, and can’t relate to the salty hate fest. It makes no sense to me. There have been times where I have been pushed to my deepest core, and still – after all the slander and the defamation of my flawed, wilted and jilted character, still – I can’t fenagle a fugly comment. I mean, I can – but to let it be muttered in an audible fashion just ain’t my style.

I don’t know if it’s passive aggressiveness, being afraid of confrontation, unable to deliver a tongue lashing, etc. I don’t think I’ll ever figure it out. After trying for all these years, I choose to call it “I’m just nice, dammit!” Here’s the deal. When you’re with me, you’re going to be lifted up a notch. Or 12. I give the people my best of everything: my best cup to drink out of, my favorite bra, the largest helping, the biggest bed, my last tampon. Everything! That could be a little slice of my southern hospitality, but I also call it not being an asshole. I want the people to feel important and included and wanted in a highly sought after, valuable sort of way. I want to be able to sleep at night. I want my kids to think “My mom’s un-assholish,” and maybe, just maybe – If I’m real lucky, they’ll mimic my behavior. The nice one, not the one where I get shit on. Being decent comes with a lot of emotions. I resent a lot of shit. I resent shit because I would never do to people what so many people have no problem doing to me, and I hold that in until I’m ready to combust. I can’t relate to nasty, because since I don’t act like that, it affects me ten fold when I get dumped on. I don’t get selfishness, either. That’s a form of “I love me, but hate you,” and is still really effed up.

I’m the type of cat who’s going to open your door, say “thank you” to the cashier, even if they don’t say it first. Or at all. I’m the co-worker that says “I’ll always help you do that,” even if it’s not remotely closely near to my job description. I like to please the people. And, I’m the person who says “I’m sorry!” a half a jackmillion times a day. Because I really am.  #sorry

I  know that I get taken advantage of. It’s not like I’ve never tried to stop it! What are some techniques that I can employ to try and reformulate the kind vibes? I’ve tried practicing the word “No.” It doesn’t work. Especially when I get put on the spot. First, I answer my phone, and suddenly, I find myself babysitting a nursery full of rabid skunk fetuses that I’ma have to sell all my belongings for just to keep them alive on their diet of beluga caviar and Dom Perignon. Those precious rascals.

So the question is – how do I find balance in my crazy? How do I maintain the nice, and gain respect and be firm and inspiring? How do I let it out gradually without holding it all betwixt my innards until I erupt and burst with not-so-kind lava?

Holler at a sister if you figure that shit out. You can definitely mistake my kindness for weakness. It’s going to kill a bitch.