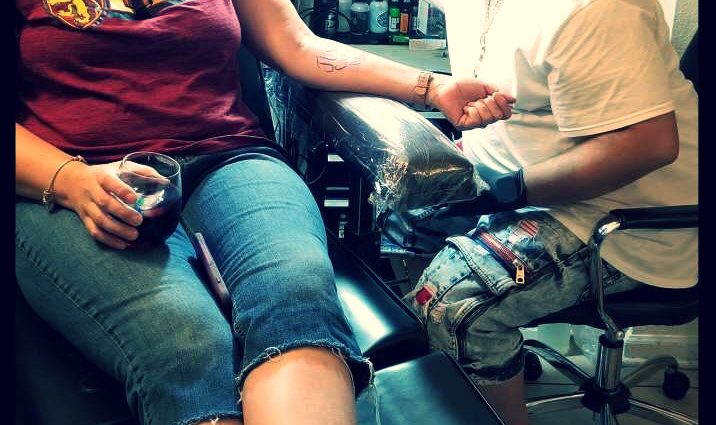 So, sometimes I feel a little blah, a little bland, kind of soccer-momish, a little stifled, and maybe, every now and then – just maybe, kinda sorta, a teensy tiny bit uncool. I KNOW, RIGHT? I always have to convince people of this. Anyhoo-I’ve been wanting to sow my wild oats for a while now. I’ve been wanting to do something naughty. And what better way of demonstrating the new Dark Side me in my first new blog entry for the brand new blog community: Hype America??

I think my itch started once I knew for sure that I was done having kids after my 3. I was missing something in my life: Not the laundry that always needed folded, not the dog that needed to be walked, not my nice and sleek on the outside, but uber kid zone hurricanish craphole on-the-inside mini-van that needed tending to, nothing was as satisfying as the notion of getting some ink. BOI! It is actually kind of funny because the tattoo that I first envisioned were my 3 kids’ names in the shape of a small heart that was going to be placed on my inside wrist. Only those privy to my intentional, blatant: “Oh my God, look what I did!” internal screaming would these super lucky audience members have been the wiser. Then, when me and my 2 friends (one was my sister in law) went to get our TATS, (If you didn’t hear that in a really cool way in your head when I said it, then that’s your problem), the tattoo artist made the stencil, and it turned out so amazing and when I did kind of mention that I wanted it smaller, he advised against it, saying that that size would compromise the look of the ink in a few years. I was DOWN for it, DOWN I SAY! “DO it!” “The new me says DO IT!” The new location morphed into half of my forearm, and I was just tickled ink.

My husband was a little astonished at first. Okay, he was super surprised AF. I don’t think we ever had a conversation about where I would put it, and maybe even what it would be, but he did know that I was going, and that was a bonus. “What the Hell did you do?” When he saw it.  “What if you have to interview again and find other jobs in the future!” Well, badass bitches don’t care about jobs and money and responsibility!

The entire process was short and sweet and really didn’t hurt much. I feel pretty! Sorry. So, now that this magic tattoo has made me young and immortal, I feel like I have my entire life to catch up on. I have so many people to verbally bitch slap, so many things to demand! The other day we were having a large family dinner at a restaurant. My brother’s girlfriend could not believe that the server hadn’t gotten my beer refill in such a quick jiff – to prevent the buff, intimidating female tattoo wearer (there is a cooler word than that somewhere) from going postal. I mean, did he see the tattoo? Does he know what I’m capable of? I looked, and there’s definitely an alley back there and I know I could do some face pounding! She points to my tattoo and raises her arms in a question to the invisible server like: “Why would you ignore this! She is CRAZY!” He still forgot my beer and about 10 minutes later, I did remind him about it in my normal non-confrontational way. When he brought it, I still apologized profusely like I had done something wrong, therefore resorting back to my prior socially awkward, jacked up introverted mind frame. I am confident, however, that one day I am going to fully succumb to my new mental brass knuckles and be able to psychologically grab people by the jugular. I will no longer be their whipping bag because I’m scary now! I’m a big, mean, meanie! I blurred the names out for confidentiality reasons, but bah-lieve me. IT’S SO COOL!!

Okay, so I’m probably not Amy Schumering my way through this situation, because I do actually know that I’m the very same idiot that I was before I got inked, but still… I just can’t help where this magic takes me!  For example, when the cashier at the supermarket goes to hand me change, I hold my left arm out and give her that look: “Don’t mess with this middle aged, 30 pounds heavier than normal, bad knee, carpal tunnel having biker bitch!”  “I will hop right over this counter, and pick myself up after I bust my fat ass and blow my knee out and and I will pinch you right in your ankle, because let’s be honest – I’m not getting up from this slick grocery store floor any time soon.”

And the next time someone that I know decides to make their passive aggressive comments to me because they know that I’m quiet and I won’t challenge their stupidity, it’ll take me 2 full seconds to very intimidatingly eye laser their dirty tongues back into their filthy pie holes. All in all, I have gotten mixed reviews – Mostly very nice comments. The people who don’t care for tattoos have all been kind and have bitten their tongues. Speaking of biting tongues!  Did I mention that Ima kill…..Oh. Nevermind.

Here’s what I think about that: I freaking love my tattoo. LOVE it. I do get the fact that I will be 75 years old one day and I will have this tat that takes up the entire underbelly of my forearm. But, the new me, and actually the old me could give two shits. I have wanted it for a hot minute; I absolutely love it, and I’m so happy that I did it. I love my new “branded confidence.”  YOU TALKING TO ME??? If you liked this post, then just wait – there’s more to come!