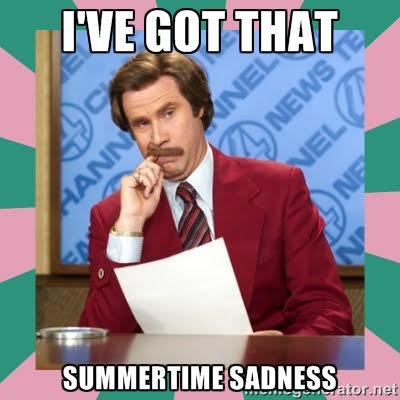 As much as I hate this wretched Florida fire of Hades flame wave that is 8 months long, I still have some reasons why I look forward to SUMMER TIME, BABY!  I do have some blistering hot summer time goals, and I will stop at nothing to complete them. Well, I’ll stop in my driveway and turn around if it’s too pungent to continue on to my mailbox. However, here are all of the ridiculous things that I plan to either accomplish or not accomplish, or to just keep adding to my to-do list every single year. I’ve got so much time! What to do with all of those gig-o-seconds? Here are some things that I’ve always wanted to tackle.

I’ve always wanted to win a Nobel Peace Prize for being an outgoing introvert. I know! It all sounds like a crazy oxy-moron, right? But, these weirdos do exist, and I feel like I’ve mastered it long enough to work on finally receiving the accolades that I deserve. The prize doesn’t have to be peaceful. It can be terrifying. It could be scarring, or it could create hives or induce shit giggles. Nonetheless, sometimes I just feel like I deserve a medal for getting through 40 seconds off my life. People suck.

The next thing I’ma try to cross off my summer bucket list is that I’ve always wanted to learn what’s going on inside of Mike Tyson’s head. Does he like poetry? Is he an autumn or winter? Does he enjoy acid washed mom jeans? I just feel like I’ll never know. #freethetigers.

Another thing I am keen to create is a single restroom with a sign out front that says: “Free AF to Pee, Man.”

There’s something that’s been unsettling to my frenzied nerves for some time now. This summer, I vow to stop listening, accidentally reading, and inadvertently scrolling through my media feed for any comments about the notorious “Making a Murderer.”  I promise that if I come across one more peek or sound of this wretched series, that I’m going to appoint myself a murderer. I will probably just kill something stupid, like the toothpaste tube, or the shampoo bottle, but only if they’re already empty, and if I was getting ready to throw them out anyway. #wus

Sometimes I want to burrow…not in the sand, not in the shallow watery shore, but every now and again I just want to burrow in some real live snow. I love being cold! As much as I do love the beaches and summer vacation, I do always secretly wish that Harry would wave his wand, and my state would magically turn into New York City (or maybe Canada, but I don’t have a passport) for a minute. I get that my life calling was evidently never to live around, or even see the stuff, but an asshole can dream. This summer I also wish to uncover the greatest conspiracy theory of all times…Who exactly was Ugly, Naked Guy? (Just keep scrolling, young, fetus hipsters). Did he exist? Was he really just an extra, or has my whole life been an anomaly?

This life goal is super way down on my list. But, sometimes I kinda sorta have a hankering to eat a kumquat.

Also – Every now and then I think it would be wicked funny to shake my booty and say “BWAHAHAHA, you freaky weird cleavage weird freak!” in front of or in close proximity to Tori Spelling. My tolerance runs low for that broad. Maybe I’ll run into her in the next couple of months.

The next factoid that I am going to expose this summer…Well, let’s take it down a notch. I am already so tired of hearing everyone’s bunghole opinions about the election – and although I usually keep mum and respect the fact that everyone has an opinion, and I know I won’t change anyone’s mind and vice versa – because, “Chill, man.” This summer I’m going to try and avoid all political talk (like usual). But, I would like to share a rare Haiku that I wrote about the upcoming elections.

Really can justify not

Oh! I am also going to make a serious attempt to not cringe or make a sarcastic comment, make my stupid, ugly judgy face or think terror thoughts when I see or hear Courtney Stodden’s face or voice.

And lastly, what I’ma do this summer for realz first and foremost is to try and write a serious blog about something serious. Seriously. BWAHAHAHAHA.