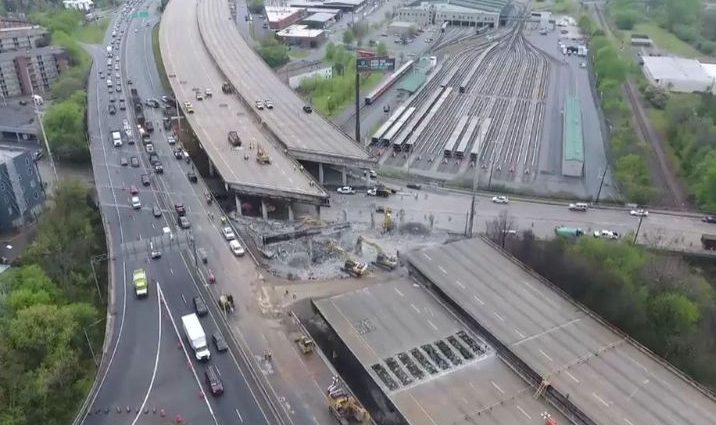 By: Steve Frick
In: Back and Gone Again
Tagged: Airplanes, Airports, Atlanta, Georgia, Hertz, I285, I75, I85, Rental Cars, Tips, Traffic
With: 0 Comments If you’re ever in need of a conversation starter mention weather or traffic. You can throw in politics, but in the current political climate, that topic can turn left on you fast.

In case you missed the news a 100’ section of a bridge on Interstate 85 collapsed last month.

Here are the Cliff Notes. Three urban outdoorsmen fashioned a BBQ grill out of a shopping cart. The fire from the grill ignited a pile of non-combustible plastic pipes. The fire burned hot enough to cause the collapse of the bridge leaving a 100′ void in the road. No one was injured and let’s hope the city can get a refund on the non-combustible plastic pipes that caught fire.

I-75 and I-85 merge together as they go through downtown and then split apart north of the city. Interstate 285 (I-285) is a 63-mile loop around the city. This loop design allows drivers to bypass the congestion of city traffic, but no one uses it for that purpose

I’ve spent twenty plus years driving in Atlanta traffic. Like most major cities the traffic there can be brutal. Atlanta has added lanes, junctions and flyovers yet none of it has helped to ease congestion.

Wednesday morning was my first trip back to Atlanta since this disaster. I had no idea what I was in for, so I decided to chronicle it. 4:57 AM – Left the house for a 7:45 AM flight, I give myself three hours to make a flight. If you’re a fan of comedy podcasts check out The Mike O’Meara Show, a solid hour of fun every day. 5:46 AM – At Orlando International and heading up the escalator into the terminal. 7:22 AM – On the plane. Here’s a tip, select a seat where the window is positioned towards the back of the armrest. It’ll give you an extra inch or so of shoulder room, more on seat selection in a later blog. 9:40 AM – Leaving the rental center. Here’s a tip, rent with Hertz as they give you a bottle of water as you leave, it’s the little things.

At this point, the trip is the typical two hours since I left O-Town. Neither the airport nor the rental center had any notices posted about I-85 road closure.

My normal route takes me up I-85, through the city and to the office in about 45 minutes. Since there’s a giant piece of I-85 missing today’s route will be different. I’ll take I-85 north and then just south of downtown I’ll take I-20 east to I-285 north and get back on I-85 up north. Google maps show the route as eight miles longer but should only take up an extra four minutes of my day, something squirrelly with Google’s math. 9:51 AM – South of downtown and ready to take I-20 east to I-285. I’ve been driving for 9 miles and I have seen three DOT signs advising of the road closure ahead. Here’s the breakdown, I left the rental lot at 9:40 AM, drove 46 miles and arrived 51 minutes later at 10:31 AM. I experienced no delays related to the bridge collapse and didn’t notice any more traffic on the roads.

I spent Thursday night in north Georgia so I had about an eighty-mile drive to the airport this morning. Not knowing what to expect with traffic I left at 8:00 AM for a 1:00 PM flight. I dropped my rental car off at 9:51 AM. An eighty-mile drive around Atlanta in under two hours, I should’ve played the lottery this morning. Now it is Good Friday, so traffic might have been light, but I’ll take it.

While the date for completion is technically June 15, the AJC reports that a large incentives package totaling $3.1 million could entice contractor C.W. Matthews to complete the work as soon as May 21, before the heavy travel period of Memorial Day weekend.

As has been the case in other similarly afflicted cities, the DOT has offered a hefty bonus for early completion of the project.

If the work is done before the weekend rush for Memorial Day begins—Thursday, May 25—they will receive $1.5 million in bonuses. If that three-week incentive isn’t enough, completion by May 21 could net the firm an additional $500,000.

As with most things in life, if you have money you don’t have a problem.

If you’re going to be driving around Atlanta plan accordingly, but the traffic shouldn’t get the best of you.

2017-04-14
Previous Post: Why Working Remotely Is Better Than Working In An Office Full Of People
Next Post: A Newbies Guide To Las Vegas