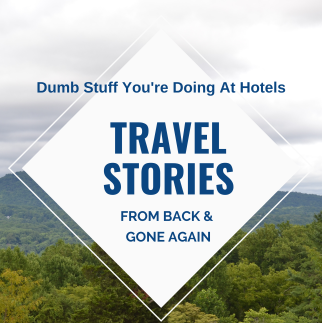 Recorded January 21, 2020, in the beautiful Hampton and Suites, Sarasota, FL.

That’s a clip from one of the funniest skits of all time – Substitute Teacher from Key & Peele. And Southwest flight 653 from Baltimore to Orlando on Jan 16th gave that skit a run for the money. Flight 653 was sold out just like most flights into Orlando are. Southwest and their open seating plan have some advantages such as choose the seat you want, and some disadvantages such as Southwest has no idea who is sitting in which seat. And that was the basis for the recreation of the Substitute Teacher skit. It seems that there was an extra ticket sold for this flight, yet there was no one standing in the aisle looking for a seat. It was explained to us that they would call each of the 175 passengers names, they would look our license to verify. There was a collective moan as they proceded to butcher anyone’s name that wasn’t Jill, Mary, David or Fred.

As the list was completed there was one gentleman who’s name wasn’t called. He was asked to leave the plane. As he left he shouted out to his buds, “If I don’t come back, grab my gear!” About 15 minutes later he returned, his buds cheered and the gate agent went on to offer up some lame reason why we were delayed. About the delay, we were scheduled to leave at 5:05 PM and it was 5:45 before we pushed back from the gate, Congrats, Miami! You have the worst commute in the entire country

MIAMI – You can stow this one away in the “Tell me something I didn’t already know” file.

A new study shows that Miami has the absolute worst commute in the entirety of the United States. That’s right, all 50 states and, we presume, territories. According to Moovit, Miami drivers spend an average of 56 minutes in their cars or on public transportation commuting to work or returning home from the job. The Magic City is tied with Los Angeles for the top spot. And if you think you’re beating the system by taking public transportation, think again. Miami leads all U.S. cities by waiting 16.46 minutes for the bus, Metrorail or train.

Where’s Atlanta, where’s Jersey and where’s Charlotte? Here’s my take on traffic. Most traffic frustration is felt by the locals, they’re the ones that know how long it should take to get from point A to point B. For the traveler short of checking Google maps, which most of us do so we have some idea, or a local telling us, we have no idea if the trip should take 20 minutes or 50 minutes. When I’m stuck in traffic in some random area I’m always checking out my surroundings, safer than doing it at 70 MPH, and I’ve discovered some cool stuff. Not booking directly with the hotel – Those discount sites will have better prices, but if you have any issue checking in good luck getting support. Sometimes these discount rates will get you a discount room.

Not being a member of the hotel’s loyalty program – It’s free and even for the occasional traveler most programs have benefits such as upgraded WiFi or free breakfast.

Not using a VPN – Nerd alert…. A virtual private network (VPN) extends a private network across a public network and enables users to send and receive data across shared or public networks as if their computing devices were directly connected to the private network. Encryption is a common, though not an inherent, part of a VPN connection. Even if you’re not logging into your bank or credit card a VPN is a necessity. A quick Google search will provide you with an endless supply of VPN services. Don’t cheap out on this.

Using the in-room coffee pot, and using it for anything. Do a quick Google search and you will find numerous coffee pot violations, from using it to cook Ramen Noodles to boiling their underwear in it.

Sitting on the bedspread naked – Make that sitting om anything naked. While housekeeping does their best they don’t work for CSI.

Paying for room service. We all get hungry and short of packing a Bento Box in your luggage, room service can be tempting and expensive. Download Uber eats and door dash, better variety and a hell of a lot cheaper.

Not checking the alarm clock – yes, most of us… most …. Use our phone as our alarm clock. However, that doesn’t mean the person before you didn’t set the clock radio for a blood-curdling alarm at 5:00 AM.

Not checking the shower before turning the water on – Possibly housecleaning left the shower plunger engaged on the spigot. You reach in to turn on the tub and your back is greeted with cold water.

Threaten a hotel with a bad review – So you’ve got a blog? Me too! Oh, you have a podcast? ditto! And you post to TripAdvisor, Yelp and Google reviews? Slow down, Mark Twain. Unless you have a following like Joe Rogan or your last name is Kardashian the desk clerk doesn’t care and the only thing your review will do is allow you to vent. If you’ve legitimately been wronged, such as a broken air conditioner or no hot water,  you’re better served by asking for some hotel points Hotel Hacks – I love hacks, some are worthwhile and others just make you feel like you’re accomplishing something and don’t really save you any time.

Leaving your hotel room key in its sleeve.

If you get a replacement key verify that your old key is deactivated.

I avoid staying on the first floor.

Lock your door, both the metal bar and the deadbolt.

If you have a connecting room make sure the connecting door is locked.