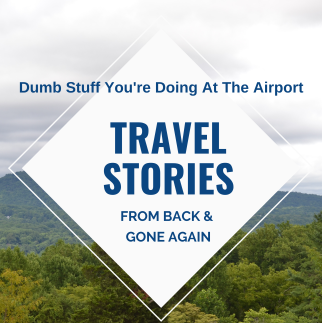 Dumb Stuff You’re Doing At The Airport, A Podcast

Last week was my first trip of the decade, a road trip, to Atlanta and back. Had lunch at the Georgia Diner in Duluth always which always serves something tasty. For you, Florida travelers on a road trip remember that the Georgia toll roads recognize the Florida SunPass, which is very handy on I-75 south of the airport. Be aware that the I-85 toll lanes are very similar to Uber surge pricing meaning that the toll fluctuates due to the amount of traffic on the road. Where the Florida turnpike tolls are static in Georgia they fluctuate.

Something interesting that I saw over the weekend had to do with old luggage, which there seems to be a huge amount of after the holidays. Typically we’ll donate it to Goodwill, but I saw where donating it to foster shelters is far more beneficial as often time these kids are moved from home to home with all of their belongings in nothing more than a trash bag.

Earlier this week I was flying out of Orlando and there was a huge back up going through the TSA scanners, even in the pre-check lines were moving slow. The gentleman in front of me mumbled something about dumb people, and I thought not really dumb, but doing dumb things. Which reminded me of a post from 2018, and it’s worthy of discussing again. So what dumb things are you or a loved one doing in the airport? Feel free to leave a voicemail at Anchor or a comment at Hypeamerica.com.

2020-01-31
Previous Post: The Difference A Decade Makes, A Podcast
Next Post: Dumb Stuff You’re Doing At Hotels, A Podcast