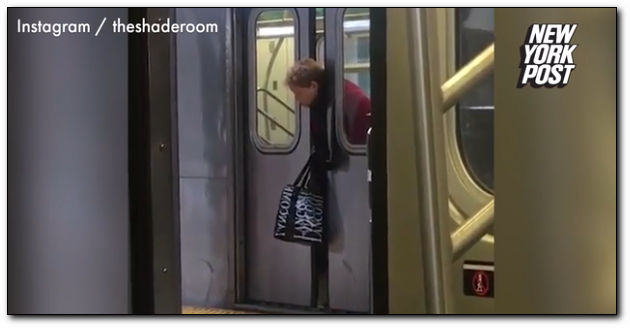 By: Steve Frick
In: Back and Gone Again
Tagged: New York, Rant, Subway
With: 0 Comments

Time to drag out to My Soapbox and offer up some TGIF venting.

Her commute was a real headache.

A woman got her noggin stuck between the doors of a 4 train in The Bronx — and fellow straphangers strolled right by without stopping to help her, a video shows.

The rider found herself in the head-scratching situation at around 12:45 p.m. on Tuesday at the Woodlawn station after she attempted to rush out of the car but failed to make it in time, transit sources said. LINK

Kudos to Danielle Furfaro and Natalie Musumeci for introducing me to a new word, straphangers.

An MTA worker can be seen strolling past the trapped woman in the clip, but the agency said the employee had already spoken to the woman and told her that workers would have the doors open soon.

What the hell is wrong with people? Are we so caught up in our own mundane existence that we can’t stop to help another human? Apparently letting the woman know that the doors would be open soon gave the MTA worker full reign to stroll past…… how about keeping a fellow human company until help arrives, which will be soon. A fellow human, needing help, all alone and more than likely scared….. how about some humanity. The word soon, is code for “we’ll get around to it when we get around to it”. Soon is what the doctor or the DMV tells you when you ask “When is it my turn?” In the video, I counted 5 people that strolled by. Strolling as if it was a common occurrence to see a noggin, another great word, stuck between subway doors. What about the asshat that felt the need to video this instead of helping? This almost sounds like an episode of Seinfeld. The easy thing to do is accept this behavior because it happened in the New York subway, but that’s the easy way out. This behavior isn’t isolated to a zip code, it’s everywhere.

It seems that we’ve become a nation more concerned with being part of social media rather than being part of the social fabric, and the worse thing is we tolerate it.

It’s funny, I read political rhetoric on Facebook and Twitter and none of those posts do anything to change anyone’s mind. Compassion is something that’s teachable, yet I see very few people posting about it, myself included.

The video posted by @theshaderoom has over 1.4 million views in under 3 days, social media FTW.

2017-04-07
Previous Post: My new fondness for reptiles
Next Post: Why Working Remotely Is Better Than Working In An Office Full Of People