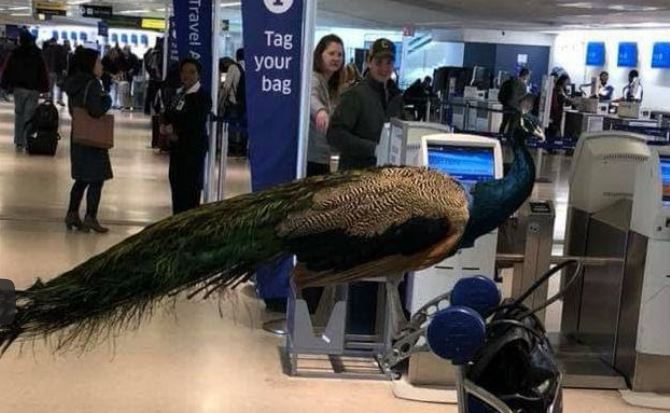 During 2017 it seemed like almost every week there was a story that involved airline passengers dishing out abuse or being abused. At this point, it appears that 2018 is going to be the year of the animal. First Delta changed their service/support animal policy, and Forever Young, But Growing Old detailed the challenges of flying with your pet. Then Wednesday morning I came across this headline, A woman tried to board a plane with her emotional support peacock. United wouldn’t let it fly.

Airlines that have begun talking about tightening restrictions on a proliferating array of “emotional support” animals on commercial flights may have found their case bolstered this week after a picture of a peacock that was reportedly denied a seat aboard a United Airlines flight traveled far and wide.

The Jet Set, a travel-focused television show based in Washington, posted the photo on Facebook of the resplendent blue-and-green bird, saying that the “emotional support peacock” had been denied boarding on a flight at Newark International Airport.

United Airlines confirmed that the exotic animal was barred from the plane Saturday because it “did not meet guidelines for a number of reasons, including its weight and size.” LINK

I want to call this a stunt, a marketing stunt, but I can’t figure out the angle. Is it someone wanting to once again make United Airlines look bad? Could it be one of those “YouTube” pranksters? Yet, SmarteCarte can now market themselves as the Tripple-P (Perfect Peacock Perch), because their product is in damn near every photo.

My skepticism hit another level once I realized that the person shooting the video was perfectly positioned and ready to roll. Also, why is this the only video we’ve seen?

If this was a legit emotional support animal she would’ve had the “required” doctor approved letter. Here’s a tip, people aren’t used to seeing peacocks outside the zoo. If you’re carrying one based on an emotional need make sure you’ve got the required peacock paperwork.

I get the whole “emotional” attachment thing, my sister carried a blanket with her till she was 17, it was 6 but 17 sounds better.

Possibly the United passengers emotional issue is never getting enough attention. Side note, that is a beautiful peacock.