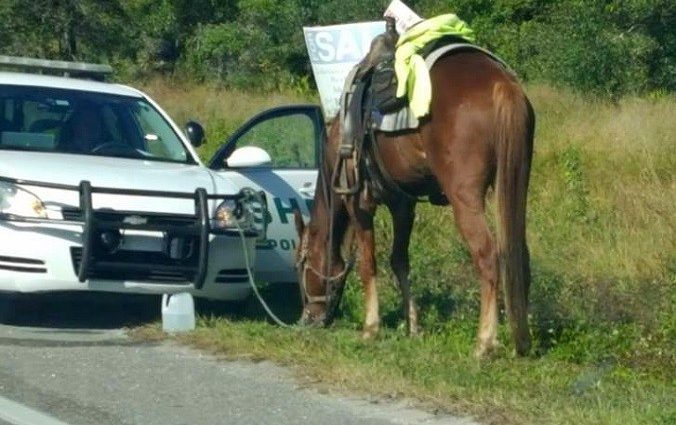 Sadly this month’s offerings are a bit slim, but travel season hasn’t hit it’s peak yet. Drunk Florida woman riding a horse charged with a DUI

A 53-year-old Florida woman was arrested and charged with a DUI, though she wasn’t really driving, but rather drunk riding a horse down a road.

Breath samples showed that her blood alcohol level was that of .161. Florida’s legal limit is .08.

This isn’t Byrne’s first arrest. She’s had 5 felony and 10 misdemeanor charges, including charges for drug possession and animal cruelty. And yet, even with a history of animal cruelty, she somehow still has a horse to drunk drive. LINK

Two things stand out in this story, and neither one is the fact that a horse is involved. Florida and alcohol, is there any better combination for a headline? A BAC of .161 I’m guessing this wasn’t Ms. Byrne’s first rodeo, so to speak. Two hashtags come to mind #FloGrown and #Merica. A Florida man was arrested after police caught him drunk driving his lawn mower down a major highway, Fox 13 reported.

Police in Port St. Lucie noticed a man driving unsteadily down U.S. Highway 1 on Nov. 3, according to the report. The man, Kenneth Burton Alleshouse, 56, was riding his red Snapper lawn mower down the road while carrying a case of Budweiser beer, Fox 13 said. LINK

A Snapper riding lawn mower and a case of Budweiser….. #FloGrown and #Merica yet again. Now Kenneth was alleged to be 3 times the legal limit, hence the case of Budweiser. If he gets convicted I bet he gets sentenced to roadside cleanup. Pilot Draws Penis In The Sky

The U.S. Navy was forced to apologize on Wednesday after one of its pilots pulled a stunt involving phallic imagery.

Indeed, it seems a member of the U.S. military drew a penis in the sky. One might say this pilot was a little too cocky. LINK

I’m willing to bet that the Navy’s procedure manual doesn’t address this matter. And how do you start the meeting that addresses it? Men are basically bears with furniture. I wonder if the pilots’ name was Dick? A Southwest Airlines pilot was arrested on Wednesday after a loaded gun was discovered in his carry-on luggage at St. Louis Lambert International Airport.

According to the St. Louis Post-Dispatch, the TSA said the gun was a Smith & Wesson 9mm handgun with seven rounds of ammunition in it. The pilot did not have a permit to carry a weapon on him. LINK

I really figured that the Pro and Anti-gun zealots would’ve had a field day with this, but I heard nothing. The take-away from this is that TSA did what they were supposed to do.

Aircraft lightning strikes are a fascinating and terrifying sight. That said, they’re common enough that aircraft are designed to suffer minimal to no damage from the surge of electricity passing over the skin of the aircraft. However, catching strikes on video is much rarer.

But one aviation videographer got incredibly lucky to get one on film last week in Amsterdam. According to the YouTube video description, the electrified aircraft was KLM flight 743 taking off from Amsterdam (AMS), beginning a 6,532-mile journey to Lima, Peru (LIM). The aircraft (PH-BVS) is a Boeing 777-300ER which was just delivered new to KLM in February 2017. LINK

In all my years of flying, I’ve only experienced a lightning strike on one flight. It was a commuter flight to Greenville, SC and it was mesmerizing to watch the strike run the length of the wing and then dissipate.

Again slim pickings this month, but just wait for December travel to kick in! Florida, don’t let us down.