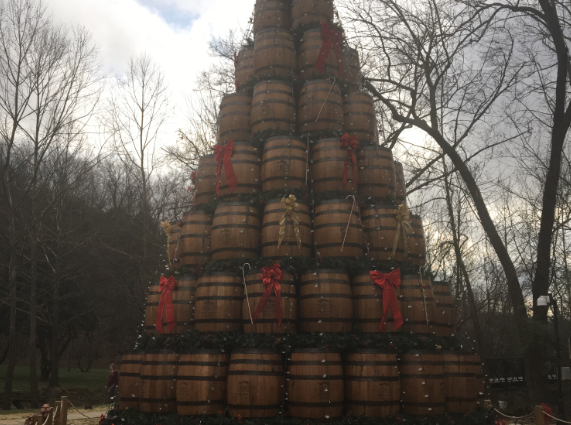 November provided me the opportunity to get caught in the fallout from the East Coasts first winter storm, and it further solidified my mantra of pick one airline and stick with it.

The original plan was to fly out of Charlotte into Orlando on American Airlines leaving at 8:15 PM arriving in Orlando right around 10:00 PM. Here’s the beauty of this plan, one of the Chateau’ Relaxo residents, The Entrepreneur, was flying in from Los Angeles and landing at 10:30 PM and they were going to ride back home with me.

I got to my gate right around 7:00 PM, and a few minutes later American sends a text informing me my flight will now be leaving at 9:20 PM putting me in O-Town around 11:00 PM. An hour after that I’m informed that takeoff time is pushed back to 10:00 PM landing around 11:30 PM. I texted The Entrepreneur and they’re fine waiting for me, and besides, we live roughly 45 minutes from MCO and if someone came to pick them up it really wouldn’t be much of a time saver.

A bit later another text comes in and you could hear a collective groan from everyone in the gate area, our flights been pushed back to a departure time of 12:20 AM. Here’s where it gets worse, I fly Southwest and rarely fly American which means I have no status with them. I call American in hopes of getting another flight out, which I could have for a very expensive change fee. Next, I checked Southwest in hopes of finding a flight I could get on, nope their last flight out left two hours earlier.

I’ve traveled long enough to have most of the standard gear, so some of these items might be geared towards the “Baby Roadwarrior”. I downloaded my year to date Amazon orders in hopes of finding a few nuggets. WiFi Display Dongle – Whether you’re doing presentations or wanting to watch NetFlix in your hotel room a WiFi Dongle can save the day. This crazy little contraption lets you display most everything in 1080p wirelessly, that means NO HDMI cable. Consider how many times you’ve had a group of people hovering over your shoulder looking at pictures on your phone, a WiFi dongle ends that. Many hotel properties are allowing you to access your Hulu and Netflix accounts on their SmartTV, but only after entering your User Name and Password. If that security breach concerns you a WiFi dongle can put you at ease. $34.00 on Amazon

Wireless Speakers  –  Are nothing new and if you’re looking for a high-quality wireless backyard speaker check out the Oontz Angle. Hands down the best bang for your $100.00 buck however, it’s too big to pack in your carry-on. Look into the dodocool Mini Wireless Speaker. This speaker is so tiny you won’t know you’re carrying it. The dodocool can work as a wireless remote shutter when used together with your smartphone camera. The built-in microphone for hands-free calling function enables users to answer an incoming call without delay. $12.00 on Amazon AUKEY Powerbank – I’ve yet to find a bad Aukey product. There’s nothing worse than having a dead phone, especially when you’re trying to let EVERYONE know your flights delayed. I just ordered several of these as gifts, make sure whatever you order is rated 10000mAh or above. $23.00 on Amazon Anker PowerPort Speed 4 Wall Charger with One Quick Charge – If you travel with family, no doubt someone will leave their charging knuckle at home. This 4 port wall charger will instantly make you a hero. $28.00 on Amazon

Belkin SurgePlus USB Swivel Surge Protector and Charger – If you haven’t noticed, connectivity is a common theme for the traveler. Between, laptops, smartphones, tablets, wireless headphones, and smartwatches most of us require two or three outlets each time we hit up a hotel room. This simple 7″ power strip will make life much easier when your hotel desk only has one outlet and the desk lamp is occupying one of the two spaces. $15.00 on Amazon Phone Tripod, UBeesize Portable and Adjustable Camera Stand Holder – This is a fun travel toy, so much so that one of the Chateau’ Relaxo residents borrowed mine… only to never return it. This tripod will easily hold your Smartphone or GoPro and they include a remote so you can control your device from 30′ away. $14.00 on Amazon TaoTronics Active Noise Cancelling Bluetooth  – I’m addicted to headphones, I normally travel with three pairs, the standard wired earbuds that I use when sleeping, wireless earbuds that I use for exercise and noise cancelling over the ear headphones when on a plane. The noise cancelling defacto-standard is the Bose Quiet Comfort, but they come with a hefty $300.00 price tag…. and yes they’re worth it. Earlier this year I purchased my wife, a baby roadwarrior, a pair of TaoTronics, and I was astonished at not only the sound quality but the noise cancelling functionality. $69.00 on Amazon

One of the items that we’ll be upgrading to this season is the GoPro Hero7 Black. Not cheap, but packed with features, such as 8x slo-mo and the new HyperSmooth Video Stabilization.

Earlier this year we bought a DJI Spark Drone and that coupled with the GoPro will help with those lasting memories. Besides the dog is fed up with us harassing her.

I’m not a fan of purchasing luggage or backpacks for someone else unless they’ve told you exactly what they want. For me my luggage needs certain features such as zippered interior pockets and doesn’t need things like four wheels, aka….. the spinner bag. Same with a backpack, I recently was with a gentleman that had an Oakley Kitchen Sink backpack. I said “that’s a great looking bag”, and his reply was, “Yes, while it looks great, it’s heavy and has too many pockets, I’m constantly losing stuff”. Scratch that one off my list. If you know someone looking for a new backpack, I can’t say enough about the Professional Slim Laptop Backpack from eBags. I’m tough on everything I use and this one has held up, complete with little touches such as a zippered pocket for my water bottle and the pass-through sleeve that slides over the handle on my luggage. Sticker price $119.00 but find a code, you shouldn’t pay more than $80.00 for this bag.

When it comes to business travel connectivity is a big thing. You need to be prepared to connect to projectors, to connect to WiFi hot-spots or connect in order to charge your phone. Anything you find that helps with this is immediately a big hit, just keep in mind size and weight. If it won’t fit in a carry-on we probably won’t use it.

The other big hit is something that is multipurpose. In other words, one piece of gear that replaces two or more pieces of gear is gold. Think Swiss Army knife, just not in your carry-on.

I’ve always been a fan of pen on paper, and one of my prized possessions is a MontBlanc Rollerball pen that I got in 1991. I’ve used this pen to sign multiple deals, car titles, and mortgages. In recent years I’ve entered the world of fountain pens, and inks. Looking to make an impression consider the Fountain Pen First-Timer Package Set from Goulet Pens. The package includes a Pilot Metropolitan fountain pen in fine, along with a box of matching black ink cartridges and a Rhodia No. 16 black dot grid notepad. If you know someone with a bit more fountain pen experience the TWSBI Diamond is certain to be a hit.

Being a “Beer Guy” as well as a “Fishing Guy” Sweetwater Brewery has 30 gifts for less than $30.00. If you’re still at a total loss check out Bespoke, with dozens of boxes that will fill most anyone on your list.

Yes, Black Friday and Cyber Monday are over, but sites like Uncrate, Gear Patrol &  Kinja Deals will continue to provide solid ideas.