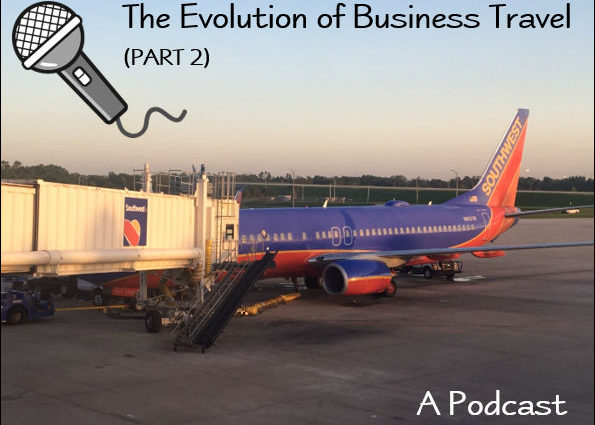 Being recorded in the beautiful Hampton Inn, Thomasville, GA.

Our last episode, The Evolution Of Business Travel,  covered some of the basics and got us to this point. Today it’s the “Travel Trinity” planes, hotels and smartphones.

Traveling by plane has truly become “Greyhound in the sky”. I grew up with an uncle that was a pilot, and my Father-In_Law was also a pilot. I grew up in the world of flying on standby. That meant a jacket or dress depending on your gender coupled with polished shoes, and the rest of the patrons held close to those guidelines as well. Now when you fly, you’ll be bombarded with those wearing pajamas and those that believe their ticket entitles them to, wear most anything.

Years ago, I sound like my Dad, dammit. There was a reward for airline loyalty. When I first hit real Delta status, that’s status beyond signing up for the program and then taking six flights in the next twelve months. Status meant something, it meant regular upgrades, even when I was flying out of Atlanta, one of Delta’s hubs. During the month of December, roadwarriors would go on what was commonly referred to as “Medallion Runs” just to hold on to status.  “Medallion Runs” meant a couple of things depending on your program. If your program consisted of segments it meant that every flight would stop in as many cities as possible between your departure and destination. If it was based on miles it meant that possibly your December travel was often times flights for what could’ve been handled with a phone call. Medallion runs aren’t as common anymore. The reason is that way the programs are currently structured if you haven’t fulfilled your status by December 1st it’s going to be a tough and very expensive month. In 2019 if you’re flying domestically the upgrades are being challenged by all the folks with a gold or platinum credit cards. The airlines don’t care since they’re getting a piece of that 22% credit card interest rate. In the last 20 years airline upgrades, meals, and lounge access have all diminished.

Hotels, on the other hand, have gained significant ground. Membership does have its privileges. Dollar vs. dollar I’m not sure which, hotels or airlines, get more of my money. Regardless the hotels take better care of me. Upgrades to suites on a regular basis combined with free drink coupons, yeah you have my loyalty. For example, I booked a Las Vegas trip using my hotel branded American Express Card, within days I received a $200.00 on-property credit to my account. Often I need to cancel hotel rooms last minute and those reward programs allow me to do it without any penalties. Try calling an airline last minute and asking the same. Hotels have upped their game when it comes to amenities. There’s a Hampton Inn in Columbia, SC that provides bicycles so you can peddle around the accompanying lake. The Hampton Inn Coconut Creek FL has a putting green located out front and the Marriott in Mobile, AL has a fitness center that’ll put your local “Globo-Gym” to shame. A few weeks ago my hotel room in Knoxville had an AireSpa, a device that offered a UV sanitized mist producing humidifier, aromatherapy with four nature-inspired scents, and 16 Soundscapes to aid in better sleep and relaxation. All this for $10.00 per day, I passed. The biggest game-changer when it comes to business travel is the cell phone or as it’s now called the “Smartphone”. When I first began traveling the cell phone was just that, a phone. I was able to call home or the office and little else. In 2000 HP introduced the “iPaq” which was nothing more than a digital assistant. They weren’t cheap and did little more than sync your calendar, notes, and e-mail using a USB connection. There were some add-ons that allowed for network connectivity and GPS. These were sketchy at best. 2007 brought us the first iPhone. There was no app store to speak of but I remember the first time I saw one. I had a dinner meeting at the Bonefish Grill in Ft. Lauderdale and our client casually placed his newly acquired iPhone on the table. The only thing I wanted to see was the ability to pinch and zoom in on a photo, something that had been touted on the Apple commercial.

Let’s fast forward a number of years and we’re on iPhone version “whatever” and the app store rules our world. In case you haven’t realized it Apple isn’t about computers and phones, their business model is software…. anything they can do to secure your ongoing revenue beyond buying a piece of hardware.

Apps have changed our world, especially for the business traveler. I call this whole transition the death of distance. My physical location means nothing to my productivity. For me I despise cabs, I have no idea why… but ordering an Uber at 4:15 AM is easy and it’s automated. Short of the random conversation with the driver nothing more is required from me. I’m not a fan of room service, again I have no idea why…. but Uber Eats allows me to order wings with a side of tacos… don’t judge. Again automation is the key. GPS and directions… a no-brainer when it comes to the phone, I can even send my arrival time to anyone.

I’m what they call a writing enthusiast. I love pens and notebooks but Google Tasks allows me to dictate tasks complete with subtasks and due dates. Evernote is my data management system. I can store virtually any type of file uploaded from my phone or PC and then I can easily access and share it from my phone. I rely heavily on TripIt. It scours my emails looking for ones related to travel. It then has the intelligence to group these emails together into a travel itinerary that I can easily share.

Even my home is automated and it’s controlled by my phone. For example, I have an app that displays the cameras around my home. It can show me something as simple as a kitchen light that was left on. Guess what, there’s an app that will let me turn that light off….. remotely. Last summer we saw a spike in Chateau’ Relaxo’s power bill. One look at the Nest app on my phone showed that “someone” was dropping the temperature on the thermostat mid-morning.

Will there be a “Business Travel” technology backlash? Doubtful, we are more efficient. Are some sidetracked by technology overload? Of course and there is an endless inventory of apps that will keep you focused. Like most things in life, it comes down to our own motivation and discipline.