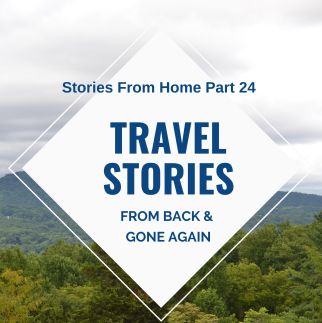 7 takeaways from Disney World’s July reopening according to CNN 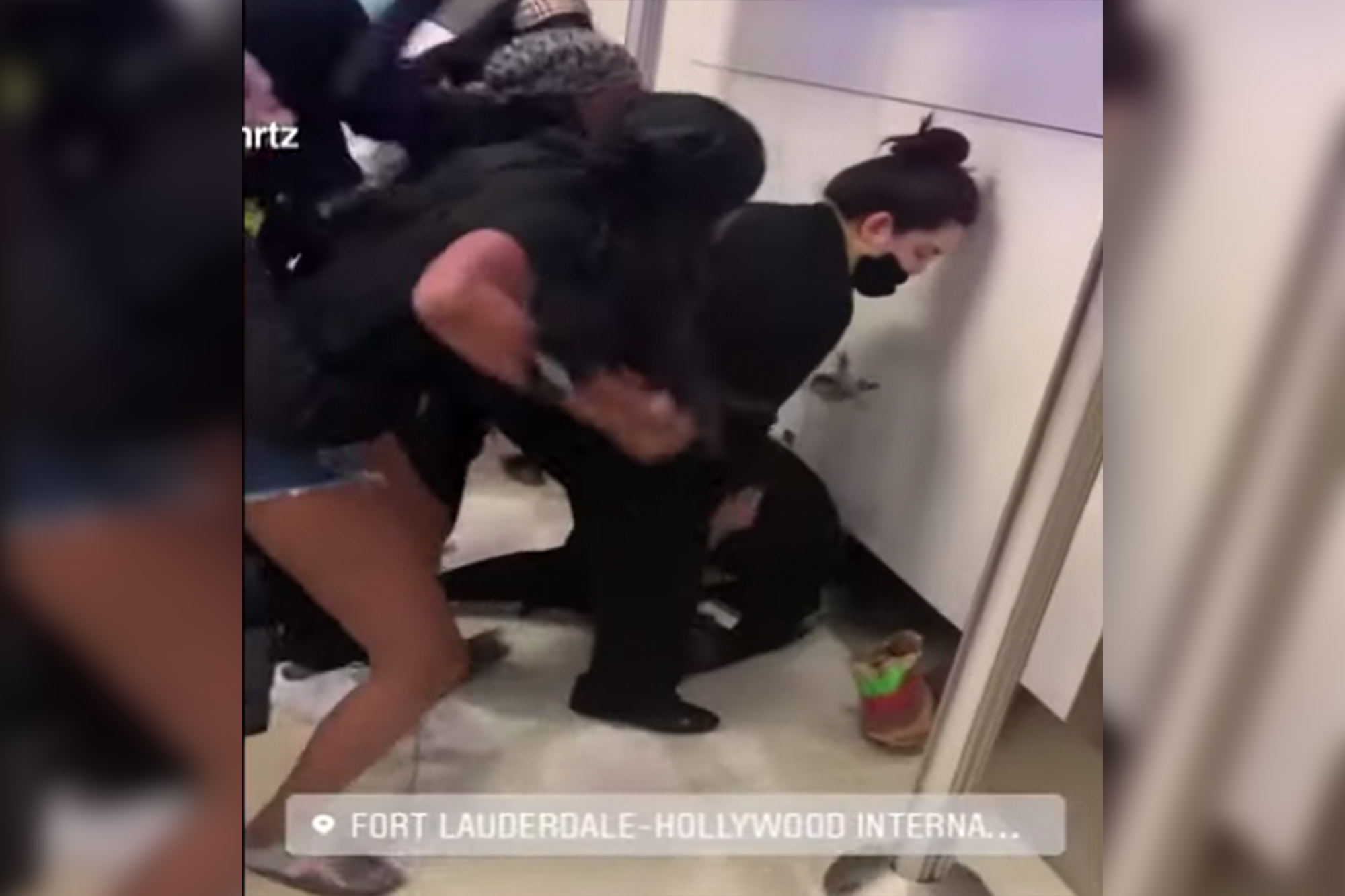 Three Blank Airlines employees were battered in a wild melee at a South blank airport over a delayed flight, according to a report. The brawl captured on video broke out Tuesday night at a gate for a Philadelphia-bound flight from Blank International Airport, news station WPLG reported. There’s a video where several women are seen hurling items at the workers before going behind the counter and attacking at least one of the employees. Among the items thrown at employees were phones, shoes, full water bottles, metal boarding signs and fast food, according to the County Sheriff’s Office.

If you guessed Spirit airlines and Ft Lauderdale Florida give yourself a point, actually two points. And why? #BecauseFlorida 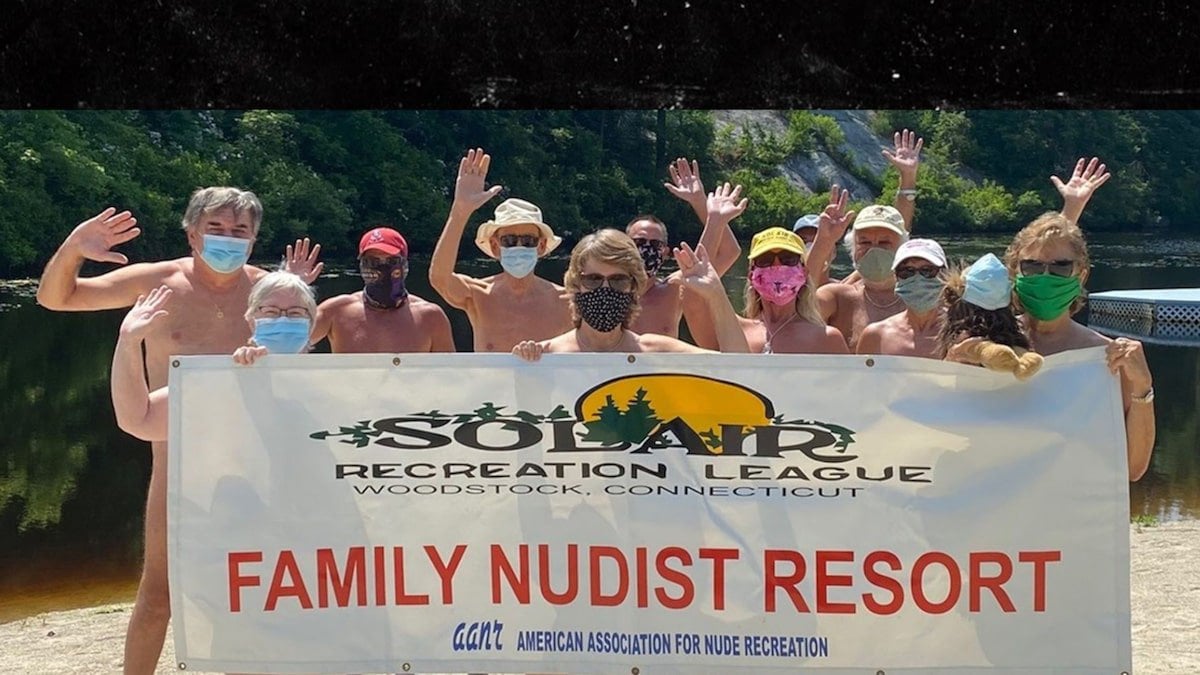 CLOTHES OFF, BUT MASKS ON!!! Naked Anger Bubbles Up TMZ

The face mask controversy is officially everywhere, because even nudist resorts are requiring guests to cover up — a decision that’s chapping some bare asses. The Solair Recreation League, a clothing-free resort in Connecticut, says it prides itself on a “no tan lines” motto, so it’s been a difficult adjustment, and some guests have complained. But, let’s get to the bottom line here … as posed by the Cypress Cove Nudist Resort in Kissimmee, FL — “If you’re wearing a face mask, are you really nude?” Apparently, that’s a big hangup for many, who feel it’s their right to be completely in the buff if they are at a nudist resort, and there should be no exceptions. You get the point … face mask face-offs are brewing at nude joints.

File this under “Bad Nudity” I’ve stumbled across enough subReddit sites to know that there’s no one at a nudist resort that you’d want to see naked, it’s all bad nudity. And thank you Kissimmee, FL  for the tip-in comment.

Flight Delayed 90 Minutes When Activist Glues Himself To The Nose Of The Plane NewsBreak.com

A dozen climate activists showed up at the Ängelholm / Helsingborg Airport on Monday evening and delayed the departure of Scandinavian flight SK2184 to Stockholm when five of them went out onto the tarmac – and one glued himself to the plane.

This makes for one hell of a hood ornament. What’s wrong with you people, even super glue has it’s limits…… that’s why there’s duct tape.

Gentleman crashes his Lamborghini 20 minutes after buying it BoingBoing

A gentleman in West Yorkshire, England, shelled out around $200,000 for a 20-minute drive in a Lamborghini. The new sports car owner then totaled it on a highway. In all fairness, however, the car supposedly had “mechanical failure,” according to the BBC, and suddenly stopped on the road. It was then hit from behind by a van, and crumpled up like a discarded aluminum can.

First, this guy got rear-ended so I’m not completely sure “he” crashed it. Second, it’s one of the few times I’ll feel sorry for someone with a Lambo. Third, I hope he took out gap insurance., 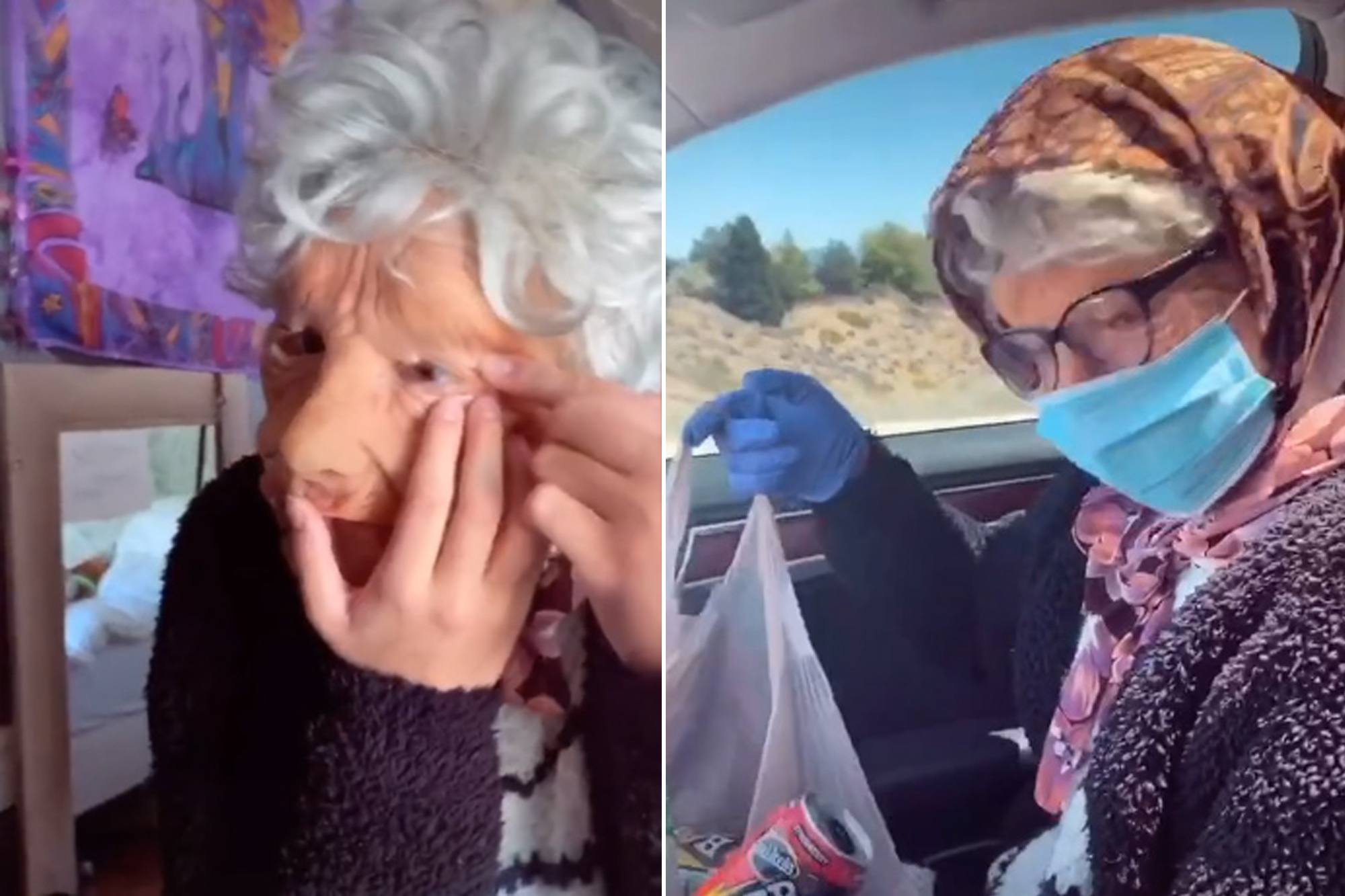 In a pandemic, no one knows you’re underage. That’s what Gen Z has discovered as they’ve updated the fake ID for the COVID-19 era, hitting up liquor stores dressed as elderly grandmas wearing coronavirus face masks. The “prank” has taken social media platform TikTok by storm, with videos of users bedecked as boozehound bubbies — seemingly victorious, bottles in hand — racking up millions of views.

That you get liquor before you turn 21 is, we’re sure, just a bonus. “PSA: use ur fakes as much as possible bc if you wear a mask they can’t see ur whole face lol,” one adolescent posted to her not-of-legal-age brethren.

“Now that we have to wear masks, this is the best time to buy alcohol with a fake ID since the early 80’s …,” standup comedian Jason Lawhead posted on Twitter.

Back in the day, we thought we were fancy with fake ID’s, right McLovin?

It was bound to happen, business travel has changed, and probably forever. Hotel occupancy rates are down 30% over 2019. Hertz has filed for bankruptcy, who would’ve ever thought that. Airline bookings are way off. I haven’t been on a plane in four months, the longest in my 30-year career.

As far as business travel has changed forever part, the way we do business has also changed. Overall revenue dollars for most businesses are down, but we’ve managed to pivot and we’re now conducting business remotely as well as virtually. Pivot, another one of those COVID terms.

I had a trip to Arizona to get canceled as well as Punta Cana. Neither place had I ever been to.

Here’s a tip for all you baby road warriors. Once you decide on your travel loyalties, hotel, airlines, etc. and your credit card strategy is established you will begin accumulating points. If at the end of the week your business travel finds you at a place that interests you cash in some of those points and spend the night or two.

Over the past four months, I’m starting to miss the business destinations that I looked forward to visiting.

Charlotte NC might be the financial hub of the Southeast, there’s so much more to do there.

When in town visit the U.S. National Whitewater Center. The whitewater course is worthy of the visit. You get to raft on the world’s largest manmade, recirculating whitewater river. Each raft is lead down class II-IV whitewater by a professional guide. Choose from each rafting experience based on skill level and intensity.

Even if you aren’t into an adventure the NWC is worthy of a visit. They offer food and beer and plenty of spots to sit and watch all the activity.

If you’re a NASCAR fan you can visit the NASCAR Hall of Fame. Plenty to do and see right down the racing simulators. Of course, NASCAR being NASCAR not much is free. Here’s what I miss about NOLA, besides the food. The new airport! I have been flying in and out of NOLA for years. First I watched the rental car facility being built, next they started on the new terminal. It’s completed, but I’ve yet to visit it. There’s a Cafe Du Monde, Shake Shack as well as an Emeril’s Table for food in the new terminal There’s even a meditation room in case you need to get your “S” together after a few days in the French Quarter. Speaking of the French Quarter Bourbon Street with all its architecture, neon and colors makes it hard to take a bad picture and the street vendors at Jackson Square is a great place to spend an hour or so. If shopping is your kink the French MArket will let you haggle prices till your heart’s content. When it comes to food, especially char-grilled oysters people always ask, which is better, Drago’s or Acme Oyster House? My answer Felix’s. Even though I’ve lived in the Atlanta area at least three times over the past 55 years it’s still one of the places that I love to visit. From fly fishing in the Chattahoochee River to climbing Stone Mountain and then watching the laser show on the lawn. For Atlanta food, there is, of course, The Varsity and the Sun Dial if you’re downtown. Each on different ends of the food spectrum when it comes to offerings and price. While you’re downtown visit the World of Coke as well as the Georgia Aquarium. Heading up north there’s the Brave’s stadium if only there was baseball being played It’s been almost a year since I’ve been here and I miss Chatt-Vegas. There are the touristy Ruby Falls, Lookout Mountain & Rock City. Ever seen a “See Rock City” barn in person? They’re a rarity with less than 100 still standing. They were the work of Clark Byers who painted the barns for three decades and became a legend in his own right by braving bulls, slippery roofs, and lightning bolts. When he retired in 1969, he had painted some 900 barns in 19 states. The usual arrangement was that the property owner received free passes to Rock City and an armload of promotional wares (like Rock City thermometers) along with the free painting for the use of his barn as an advertising aid. Those who didn’t need thermometers might be paid a modest sum of $3.

Downtown Chattanooga is another great hub of activity, with its own aquarium, children’s museum, and the Naughty Cat Cafe. Chattanooga’s first and only Cat Cafe. Over 2,000 square feet of lounge designed to be comfortable for people and adoptable cats. Enjoy a tasty drink and snack while you relax and play with up to 30 adoptable cats. Another small town that’s been revitalized. This year’s spring break trip was to take us through here for a few days but the COVID forced a re-route. I’ve watched the rebirth of Greenville over the last 20 years. One of my most memorable flights was going into Greenville. I was in Richmond Virginia and had an emergency and had to be in Greenville for a morning meeting. I ended up flying direct on a small commuter jet landing late at night. The plane was maybe 25% full because not many folks fly direct from Richmond to Greenville. Anyways the pilot landed with the cockpit door open, pre-911 with all the runway lights guiding us in, it was an amazing sight.

There’s no shortage of great downtown Greenville food but make sure you check out Falls Park and the Reedy Bridge area, complete with a Hampton Inn overlooking the park. Greenville reminds me of a very artsy-fartsy town, so much artsy that there’s a Mice on Main Scavenger Hunt. Nine small brass mice have hidden along Main Street, similar to the hidden Mickeys at the Mouse House.

Then there are places that I want to spend more time in or discover for the first time. I’ve used my business to fuel my ideas for personal travel. Honestly, I never would’ve considered going to Buffalo, NY had I not been there twice last year for business. Yes, I knew Niagara Falls was close by as well as Canada but the touristy stuff isn’t always my first pick. After I drove through the countryside and met the people and tasted the local delicacies, it was then that I knew I needed to spend more time here. We enjoyed last year’s family trip so much that we’re considering a more extensive adventure through Canada. Seattle, Washington – I had a 5-night trip there last September, and while getting there was a nightmare. Multiple stops and five days of dress clothes requiring checked luggage quickly became the perfect storm. The perfect storm was flight delays totaling a 15 hour travel day, and you guessed it lost luggage. All of that aside I’d love to spend more time here.

Berkshires, Massachusetts. I’ve driven past here as I’ve traveled from Albany New York to places like Boston Massachusetts and Springfield Connecticut. If you find yourself in this area during the fall it is mesmerizing. Beautiful  New England towns surrounded by the vibrant seasonal colors. This area begs for my return, complete with my Orvis flannel shirt, 4wt fly rod, and both my GoPro and Drone. Those items will only help to solidify my memories. In the back of my mind, I picture myself listening to Vivaldi’s four seasons as I drive through the countryside.

As fortunate as I have been with business travel there’s one gaping geographical area….. The middle of the country, the Dakota’s, Colorado, Montana, and the likes. Nothing wrong with International travel and a trip to Ireland or Scotland is right up my alley, but there’s so much here stateside to see and do.

Yep, I miss these places, but I have the memories as well as the pictures.