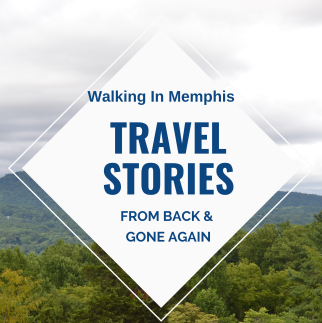 I had a recent one night turn and burn trip to Memphis. About 20 years ago I spent 8 weeks there, fly out on Monday and back home on Friday. Those 16 flights allowed me to make Delta Gold for the first time. This was before most credit cards were tied to an airline loyalty programs, so Delta Gold actually allowed you to get upgrades and change or reschedule flights for about $25.00. In 2019 Delta Gold means little, two or three upgrades per year at best, but at least it still covers free Sky Club access.

I still get back to Memphis on a regular basis, but a few things have changed at Memphis International in the past 20 years. The biggest improvement is that the rental lot is on airport property. No more waiting for the Hertz bus to haul you and 20 others to the off-property rental lot. This easily added and an additional 20 minutes to each trip. Some things have not changed……. Memphis is one of FedEx’s major hubs with at least 150 FedEx planes coming and going each day….. Memphis knows how to handle packages, and handle them efficiently. What they aren’t good at is handling luggage. I was traveling with a colleague who arrived about 90 minutes after I did. I hunkered down in baggage claim and watched as planeload after planeload of passengers waited, for what seemed an eternity for their luggage to come out of the back. Someone from the Memphis airport needs to walk across the tarmac into the FedEx logistics department and ask for some tips.

Right or wrong I consider Memphis as part of the Mississippi Delta. If you’ve never traveled to the Delta it’s this wonderful sensory overload of perfectly crafted music, tasty regional food, and wonderfully friendly people. Yes, that many adjectives.

My hotel was downtown Memphis, and the ride in was filled with musical references. We took Union Avenue, which Marc Cohn sang “Saw the ghost of Elvis On Union Avenue” in his Walking In Memphis hit. We passed Sun Studios which was the birthplace of Rock-N-Roll and launched the careers of Elvis, Johnny Cash, Carl Perkins, Roy Orbison just to name a few. As we turned the corner towards our hotel the WC Handy museum was on the left. Another Marc Cohen lyric “W.C. Handy, won’t you look down over me”.

Downtown Memphis is this mix of big commercial businesses with small local shops and in the center of it all is the Memphis Redbird’s ball field. I’m not a huge professional sports fan, but I’ll happily watch any minor league sports team. Here’s a travel tip. Anytime you enter a hotel room and find a pair of earplugs on the nightstand there’s a reason that they’re there…. and it’s not because the couple in the next room is going to have sexy-time, oh no it’s because your room is one block off and facing Beale Street. For us travel always involves food and dinner was at Blues City Cafe. If you know people, which we do, you can skip the line and walk in the side door off of 2nd Street and find a reserved table. Start your meal with their Sausage & Cheese Platter called  “The Beale Street Throw Down” – Hickory smoked sausage, an assortment of cheeses, kosher dill pickle chips, crunchy bread, and butter pickle chips, & mild pepperoncini’s w/ BBQ sauce for dipping. If you’re there with others then order some stuffed mushrooms – A simple cast-iron skillet filled with fresh button mushroom caps stuffed with a shrimp and crabmeat mix and sauteed in garlic butter.

The main course was meat, meat and catfish. The 24oz Cowboy Cut Ribeye was as thick as my homeroom teacher’s glasses and hung over the sides of the plate. Cooked medium, it was a work of culinary art. I went with the ribs. As cliche’ as it sounds the meat fell off the bone. The Blues City Cafe’s BBQ Ribs, Seasoning, and Sauce have been featured on The Travel Channel’s “A Taste of America”, The Food Network’s “Bobby Flay Show”, and Bon Appetit Magazine’s BBQ Issue. The catfish was devoured, and all of it was harvested in Mississippi. Not a big deal to most folks but when you’re in the Delta area it’s a huge deal. Much of the catfish served in restaurants across the USA come from overseas, which means less monitored control of the final product. A few local IPA’s were downed, this was stop number one, which will make more sense in a bit.

The second stop was just across Beale Street at B.B. Kings Blues Club. This place was packed for a Wednesday night. We ended upstairs huddled in a corner listening to the P.S. Band. These guys killed it, from Stevie Wonder to Prince, each song was a musical adventure. The P.S. Band finished their set with Purple Rain, the place emptied and we headed out explore Beale Street.

It’s now approximately 11:00 PM so what do 4 middle-age adults decide to do? We decide to hop on Bird Scooters…that is after we drag them outside the no-ride zone. Pushing a bird scooter reminds of the Publix employee that has to ride the electric grocery cart back into the store, there’s no way to look cool.

Besides, what could possibly go wrong? Well according to Business Insider there are 1545 things that could go wrong. 1545 is the number of e-scooter injuries that happened between February 2018 and February 2019. Honestly, these things are dangerous, made more dangerous by the fact the pick-up drop-off point was 3′ outside of every bar on Beale Street.

After 20 minutes or so of reliving our childhood adventures, we needed something to bring the testosterone level down just a bit. Enter the dreaded third stop. For you first time listeners the third bar or third stop is where the bad things happen. This is where shots of Fireball or Yeagermeister suddenly become a good idea, no one starts out their evening drinking those. The third stop was B.B. Kings Blues Club where we found the P.S. Bands frontman, Jerry Jones, had decided to come back out for an hour-long encore. This is where Tequilla, a clear liquid that holds the same mythical powers as Fireball and Yeagermeister enters the picture. Here’s a bit more detail about B.B. Kings Blues Club….. It’s a two-story establishment that’s dark, the lighting budget is spent on the stage and performers, not the customers. The tables are covered in fan art, and the chairs are hard and wooden, perfect for a bar fight. Most drinks are served in plastic cups, nothing to wash, And the bartenders are excellent lip readers because the music is so loud you can’t even hear yourself. B.B. Kings Blues Club focuses on music, music from the soul, that speaks to your heart.

After a few more beers and some Tequilla we closed the place down, literally. As we were filling the tip bucket for one more song the staff was flipping bar stools upside down on the bar. The band obliged as they belted out that last song….. 12:30 AM with our ear still ringing we yelled “Good Night” and headed back to our hotel. It was then that I discovered what those earplugs were for…. while B.B. Kings Blues Club might have shut down around 12:00 AM not all the other clubs followed suit.

Could you vacation here for a week? doubtful. Is it worth a 2-hour drive from Little Rock or a four-hour drive from St Louis, absolutely. Between downtown (including the Peabody Ducks) Graceland and the food it’s worthy of a 48-hour stay.