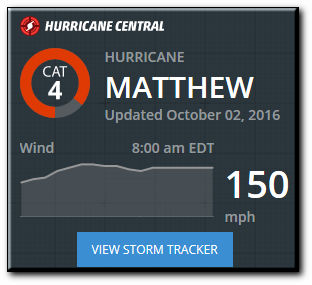 I’m not much of an alarmist, especially when it comes to the weather and travel. I routinely head up north during winter forgetting a heavy, actually any coat, my wife swears there’s an umbrella in my backpack, somewhere, and I love driving rental cars in the snow.

Rolling into Monday it looks like we’ll be faced with the possibility of a solid soaking mid to late week. Not once did I mention the word Hurricane Matthew or the fact that the last Cat 5 hurricane in the Atlantic Ocean was 2007. In case you’re in need of preparedness information the National Hurricane Center offers some ideas.

If you happen to be traveling to the Bahamas, Jamaica, Haiti,or Cuba in the next few days I suggest, if you haven’t done so already, some semi-alarmist research. Delta has already posted an advisory for various cities in the Caribbean.

Southwest has some waivers posted as well.

American Airlines is a bit vague as of Sunday afternoon.

If JetBlue is your carrier of choice, they are also offering some relief.

Don’t forget your hotel reservations, Marriott cancellation fees are being waived until Tuesday, October 4, 2016 for anyone holding reservations at the Courtyard Kingston, Jamaica or the Marriott Port-au-Prince Hotel, Haiti. As of Sunday, I saw nothing posted for Hilton or Holiday Inn properties.

When it comes to rental cars, more than likely they’re not about to let you take their $15k asset across a flooded windblown island, but double-check just to make sure you’re not on responsible for the reservation in case you don’t show up.

Seriously, if you’re the least bit uncomfortable don’t travel, there’s no need to end up on someone’s YouTube channel as the idiot that didn’t heed the warnings.